On Thursday 23rd of June 2016, Walworth Academy held a vote for whether the UK should stay or leave the EU (European Union). This was conducted through handing out poll sheets to members of all 8 tutor groups in each year group. It gave us the opportunity to express our views and opinions. Also, to give us experience on how to vote for the future. The results were counted out of a ballot box (statistics can be found below).

The Walworth Academy family has voted on to remain in the EU. It has been quite a landslide seeing as 77.8% of the vote was to remain. These results are expected to be quite different to the actual vote seeing as the margin is so high.

The overall turnout for the school was only 35%. We speculate that this is a reflection of the younger generation’s low interest in the world of politics. This could also be due to students believing their input has absolutely no impact.

An outcome of this vote may be that it will influence students to research more into politics as this can have an effect on our lives. 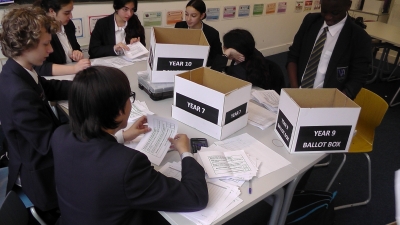 After gathering all the data, we came to the conclusion that a larger proportion of year 10 want to stay in the EU rather than leave. Unfortunately, our year group had the lowest turnout with only 30% in comparison to year 7, 8 and 9.

It is likely that the reason for the low turnout amongst year 10 is due to the fact that voting sheets were handed out straight after a Science exam, consequently students were not as focussed on voting. Also, as a year group we have a lack of information on the importance of politics and the importance on how leaving or staying will affect us.

We believe that the data by form is unreliable as there are a large proportion of votes concentrated amongst 10.2 and 10.8. However, we know a lot more students who voted from other tutor groups and this was not shown in the data collected. We have suggested that next time sheets should be handed out more accurately to achieve more reliable results.

In the year 9 EU referendum, the Remain campaign won with a resounding majority. 89% of students that voted, voted to remain in the EU, while only 11% opted to leave.

The total turn out for the vote was 36% of our year group, 63 pupils out of a possible 176. The low turnout may be reflective of the low interest in politics in the younger generation. However, this trend may be bucked in the EU referendum as it is a once in a life time event that will never be repeated again.

This referendum will have a greater effect on the pupils whose parents are not eligible to vote, rather than those whose parents are eligible. This may draw in more pupils than a general election repeated every 5 years.

Data analysis and write up by: Khalil

Votes counted by: Elijah A

Data analysis and write up by: Elijah A

As part of the EU referendum, Walworth Academy did a ‘mock’ vote. Year 7 voted the most with a total of 41% of us voting.

Out of year 7, the verdict was to remain!

Tutor groups were displayed at the bottom of the voting paper. Tutor 7.1 did not vote to stay. Infact, they voted to leave, with six people in tutor 7.1 wanting to leave the EU. Tutor 7.2 voted the most, with 16 people wanting to stay. Only one person voted to leave.

We think that year 7 wanted to stay and voted the most because they wanted to be involved in school activities. We speculate that they may want to vote for fun. Sadly, year 7 may not know much about politics, but they could.

When we look at the tutor 7.2 who voted the most. They may have made their own choice, but they could have been influenced. Tutors who wanted to stay or leave could have told year 7 what it will be like if we leave the EU. Parents or carers could have also told the children who to vote for. We also found some spoiled ballots in the box. These would have corrupted the results. So, we had to remove these.

In conclusion, year 7 wanted to stay in the EU! We also voted the most!

Thank you for reading.

Data analysis and write up by: Rhys D 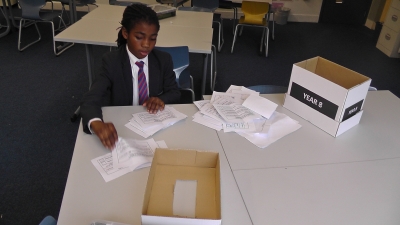 Percentage (%) of voters who turned out to vote