In the true spirit of democracy, the Ark Walworth Academy family turned out to vote.

Labour accumulated 84.9% of the total vote with the other parties thinly spread. The choice of parties reflects the choice in our constituency.

Our students have written articles and summaries breaking down how each year group voted. You can read more details about a specific year group by clicking on the appropriate link below. 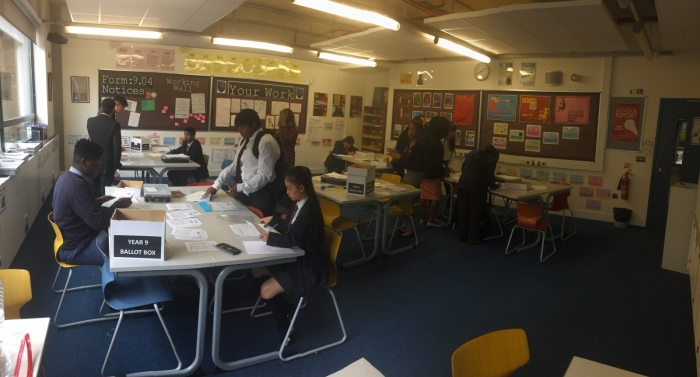 The reason 37% did not vote, is due to some people not being available because of exams or absence.

As a Sixth Form student, I was able to vote for some absentees as a proxy, they made me aware of who they would vote for and the reasons they did not have the time to come and vote.

I believe that majority of the students do not think much about politics because they feel it's pointless because they are not at voting age. Whereas others feel the exact opposite, as they realise the government have ultimate power over the decisions made in the UK, therefore they feel it’s right to know each party's manifesto. Many students in the Sixth Form study subjects such as Economics, History and Sociology, therefore they have taken more of a vested interest in politics. However, many individuals are very aware of their political views because of the influence of their families. In addition, as Head Girl of year 12, I’ve noticed that the percentage turn out of year 12 was higher than year 13. I think this was because most year 13s are actually able to vote in this snap election, therefore participating in the election within school is irrelevant and study is a much better way to spend their time within the school day.

Overall 63.4% of the Walworth Academy Sixth Form did vote and their votes have shown a clear viewpoint of those who live in Southwark and nearby boroughs, which also suggests the youth awareness of the government in the area. From my perspective, the turn out of those who did vote is quite strong considering these votes are uncountable towards the real election.

In Year 11, there are 102 students in total, 64% of which voted and the minority of 38% didn’t vote. Overall as a year group, the party that received the most votes was Labour proving that the majority of year 11 would want Labour in power.

40 of the boys in year 11 took part in the election and only 14 girls took part. This could be because year 11 has exams which they may have been revising for. A large proportion of year 11 voted for Labour and this could be because Labour has a policy of there being no university fee for those who wish to go university which is something year 11 students will soon be considering. Also as year 11 are under the age of 18, they do not have the right to take part in the real election therefore they do not have a say in who they want in power. This could mean that the 38% of the students who didn’t vote may have thought that there isn’t a point to voting in school as it doesn’t necessarily count to the real election. On the other hand, some students may have made the decision to vote, as Labour is also suggesting that the minimum wage for jobs should be £10 per hour. As some students from year 11 may be considering to go into employment after school therefore as they would be the younger colleagues at work they would be paid minimum wage. In regards to this policy, this means money would be better for younger workers or those with little experience in the particular field they are working in. The tutor group who had the largest turn out for students taking part in the election is 11-6 with 65% of the tutor group who chose to vote.

Ultimately, year 11 believe that Labour should be in power as do the other year groups in Walworth Academy therefore this unveils the student’s opinions on the general election. This election allowed the students to have an opinion in something that people under 18 do not usually have making a difference.

Overall the victor of the Mock General Election was the favourite, Labour with a resounding 86% of the vote, followed by UKIP at 6%, followed by the Conservatives and Green Party both at 3% and the Liberal Democrats at 1.5%.

I believe these results were a consequence of variety of reasons primarily stemming from socioeconomic factors. The constituency of Camberwell and Peckham has been a Labour stronghold for many years with 32,614 votes going to the Labour candidate in previous years. This huge proportion of Labour voters may suggest why the margin of victory for Labour was so huge in the Walworth Academy Mock Election as people’s ideologies and beliefs influence their own children resulting in them voting Labour. Furthermore Labour’s policies if implemented correctly would be greatly beneficial to a student from a working class or lower middle class origin as Labour plans to abolish university fees. Finally peer pressure may have been a contributing factor as students who know little to anything about politics will vote for who their friends were voting for.

Perhaps the largest surprise of the election is the percentage of UKIP votes at 6% especially considering how diverse Walworth Academy School is. Therefore it is logical to assume that the people who voted for UKIP did so as a joke as people shouted and laughed about voting for UKIP at the polling stations as they perceived the election as unimportant.

In addition to this the third most prominent party was also a surprise the Green Party perhaps suggesting that young people are becoming more conscious of environmental issues.

Ultimately the result of the Walworth Academy Mock General Election is a reflection of the results of the General Election in the constituency of Camberwell and London and illustrates the appeal of Labour’s policies to students from a working class and middle class background.

One talking point of the Walworth Academy Mock General Election is whether it was democratic to take the Years 7, 8 and 9 out of class and prompting them to vote. It has been suggested that prompting students in Year 7, 8 and 9 to vote would ruin the legitimacy of the vote, as being prompted to vote may result in people rebelling or protest voting for parties such as UKIP or the Green Party. However, I believe that the result of the Mock General Election is not important. Rather what is important is teaching the younger generation the value of voting and having your say. By providing the students with time out of their lesson it allowed them to experience a taste of what being a part of a democracy is like and the power of voting. Through doing so I believe it will encourage students to vote in the actual General Election in 3-5 years’ time when they have the power to make a change in society.

In Year 9, there is a total of 178 students, in which only 66% voted, leaving the remaining 34% who did not vote at all. 9-1 is proved to be the tutor group to have voted the most (20 students), in comparison to 9-6 with a count of 9 votes. Evidently, more boys are shown to have voted than girls, with a statistic of 56 boys and 44 girls, altogether.

The party containing the most votes was Labour, revealing that the 90% majority of Year 9s were in favour of this. The UK Independence Party (UKIP) and Liberal Democrats were both tied with 2 votes each, making them the least voted. From the evidence gathered, there were only 3 votes towards the Green party, 5 for the Conservatives and 0 votes for Independent.

Possible reasons as to why a minority of Year 9s did not vote could be due to the lack of education in school on different political views, therefore leaving them undecided on what to vote for. A few Year 9 pupils could have also seen no point in voting in school, since they are underage and therefore, their votes would not casted towards the official election.

Most people would have considered voting for the Labour party due to the beneficial outcome, such as: Labour are supporting no university fees, which would be effective for our future generation, where students would no longer have to pay for further education. Furthermore, this could be a popular party, because it is aimed at average to working or middle class people, also giving young children under the age of 3 advantages such as free day-care. They also encourage child benefit for every child in the family, not just the first two children.

Ultimately, we have concluded that most of the year group have casted their votes towards Labour. This shows the involvement Year 9’s have on the general election and demonstrating their views of democracy in society.

There are 173 students in year 8 in total and yet there is about 85.5% of students that have voted, leaving the remaining 14.5% of students not deciding to vote.

From the evidence gathered, from the division of party votes, the highest vote score was for Labour with 91.2% of students that voted. These overall scores portray how successful Labour were in presenting their aim in helping everyone to have economic equality, which gradually influenced the majority of the year 8 students.

However, from looking at the other scores of different parties it is UKIP that has come in second place having the amount of 7.3% of votes. The rest were left with either 0.7% or none at all. It reveals the possibility of peer pressure throughout the whole year group due to the fact that there is a huge difference between the overall scores. Provided that the 14.5% or students did not vote could imply the obvious thought that they are not fully interested or most are too young to confidently understand what this voting is personally about. This conveys the fact that a large proportion of year 8 students are not ready to decide on their own judgmental conclusion.

In total 119 people out of 187 in year 7 voted. This is a high amount of people considering the fact they are young and they do not have the right to take part in the real election, they probably voted because they want their voices to be heard and labour have the most sensible promises out of all of the parties. In our world mostly everyone care about money and without money they cannot live. Since they are kids they care a lot about money and Labour promised to ensure that no one who works gets less than £10 an hour. The tutor group that voted the most was 7.6 with 26 people out of 27 voting. The tutor group that voted the least was 7.7 with 7 people out of 26 voting. 65% of people in the year group voted.

A special thanks to all of the pupils and staff who participated, especially the volunteers who worked at the polling stations, counted the votes, processed and analysed the data and wrote summary articles. It is these contributions which enable democracy to work. Finally, a special mention for Sky (y12), whose committment, organisation and leadership qualities helped the Mock General Election run smoothly. 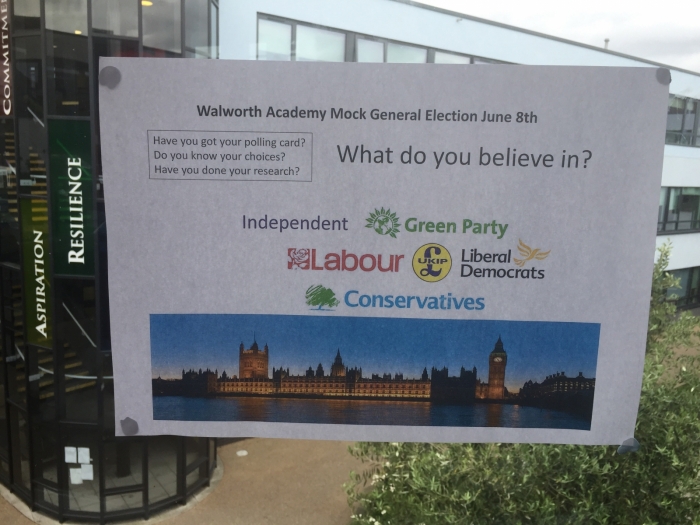