Walworth drama were delighted to welcome the Royal Court ‘Young Court’ Theatre company to perform their stunning and very hard-hitting piece about FGM in contemporary Britain. First performed at the Royal Court and then transferred to the ‘Young Vic’, this two-handed performance kept year 9,10 and 11 students enthralled as the intertwining stories of two Somalian girls raised in different countries became increasingly, and frighteningly linked.

110 students took part in the question and answer session and all of the year 9-11 Drama students took part in high-quality workshops with actors and theatre practitioners from some of London’s leading theatres.It was a sheer delight to host this major piece of touring theatre, along with it 10-strong crew to ensure the intricate set, lighting and sound cues were so beautifully executed.

‘It was eye opening and educational. The actors so naturalistic.. she was definitely crying at the end !!! I learned things I had never even thought about before at the workshops’

With Huge thanks to Vicky Berry and the young court (Royal Court) theatre education group for their massive efforts in bringing the tour to Walworth. 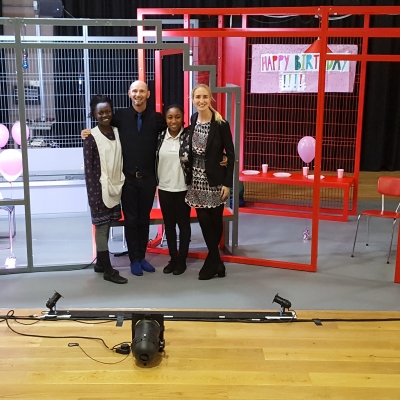